With temps dipping below freezing, I’ve had a couple mornings with frozen waterers. That meant the procrastination of deciding what kind of waterer heater to get was at an end. It was time to decide how to prevent the waterers from freezing. Do I buy a ready made heated waterer? Do I use a heated dog bowl? Or do I try my hand at the homemade variety?

After a trip to a couple of stores to see what was available locally, I decided to go the homemade route. Since I have a number of tins which could work, why not? 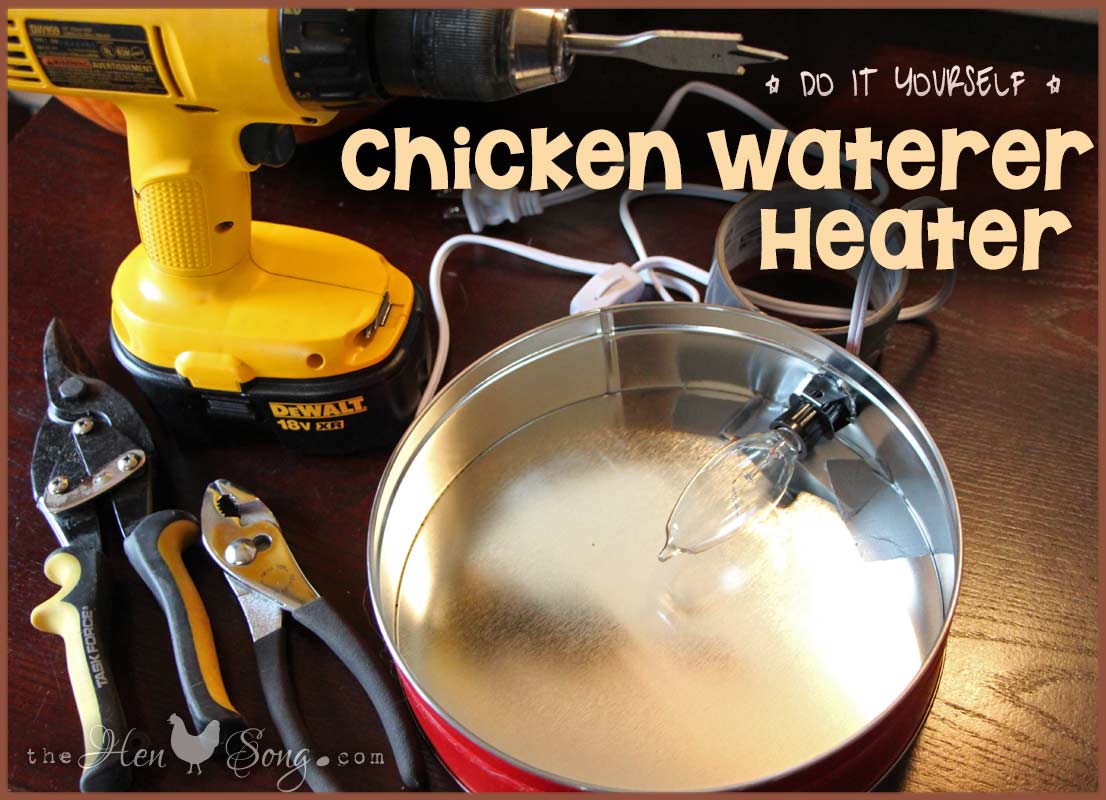 I bought a Candelabra Base Switch Cord for around $4. SInce I have a few candelabra lights in the house, I already had the bulbs. I had one tin which was about the same diameter as my waterer. It wasn’t very tall, but perfect for using a candelabra light inside. I placed the tin under the waterer and it fit perfectly.

So, I gathered a few supplies (see photo) and started by drilling a 1″ hole in the side of the tin, which was easier than I thought it would be. I then pushed the candelabra base through the hole. It has a metal clip which snaps in the hole to help keep the bulb base in place. I added a thin piece of metal under the base of the light as an additional support, just to make sure the light would sit between the base and lid (and not touch either). True to Alaska fashion, I used duct tape on the outside of the hole to keep cold air and water out. I placed it under my waterer and plugged it in. Viola!

Since making this heater and installing it, the temps have stayed above freezing. (Figures, eh?) But the tin is warm when turned on, and I think it will work nicely. It was easy (and inexpensive) to make. The girls don’t seem to be pecking the cord (I have the waterer close to a 4×4 post, to which the cord is attached). The cord comes with a nice on/off switch, though I am planning on plugging it into a thermocube, which will turn it on and off depending upon the temps.

So, we’re ready for the freezing temps now. Happy day!

What is the hen song?

Well, once you hear it, you'll know! When a hen has just laid an egg–or is getting ready to lay an egg–she will sing out loud and proud! Each hen is different, and not all gals sing. Some just lay their egg quietly and go on their merry way. Others want the whole world to know that they just did something totally incredible!

Growing up in New England we would often visit farms to pick apples, pumpkins and Christmas trees. Since moving to Alaska some 20 years ago, I have learned to fish and dipnet, smoke salmon and halibut, grow my own vegetables, make preserves from the berries I harvest, bake bread from organic ingredients, and raise happy, healthy chickens for beautiful, healthy eggs.
I am happier and healthier knowing where my food comes from. And the choices I make have a direct effect on the environment in which I live.
Life is good. And getting better all the time!