I’ve always wanted to try making a cinnamon bread, and here it is! I must say, it turned out rather well. It’s not too sweet and easy to make. You could easily use honey in place of the first sugar. And use whatever flour you’d like. I actually baked mine on a cookie sheet, but I would recommend putting it in a loaf pan so it doesn’t flatten out so much. I tend to “wing it” with recipes, but a number of folks wanted the recipe, so here it is: 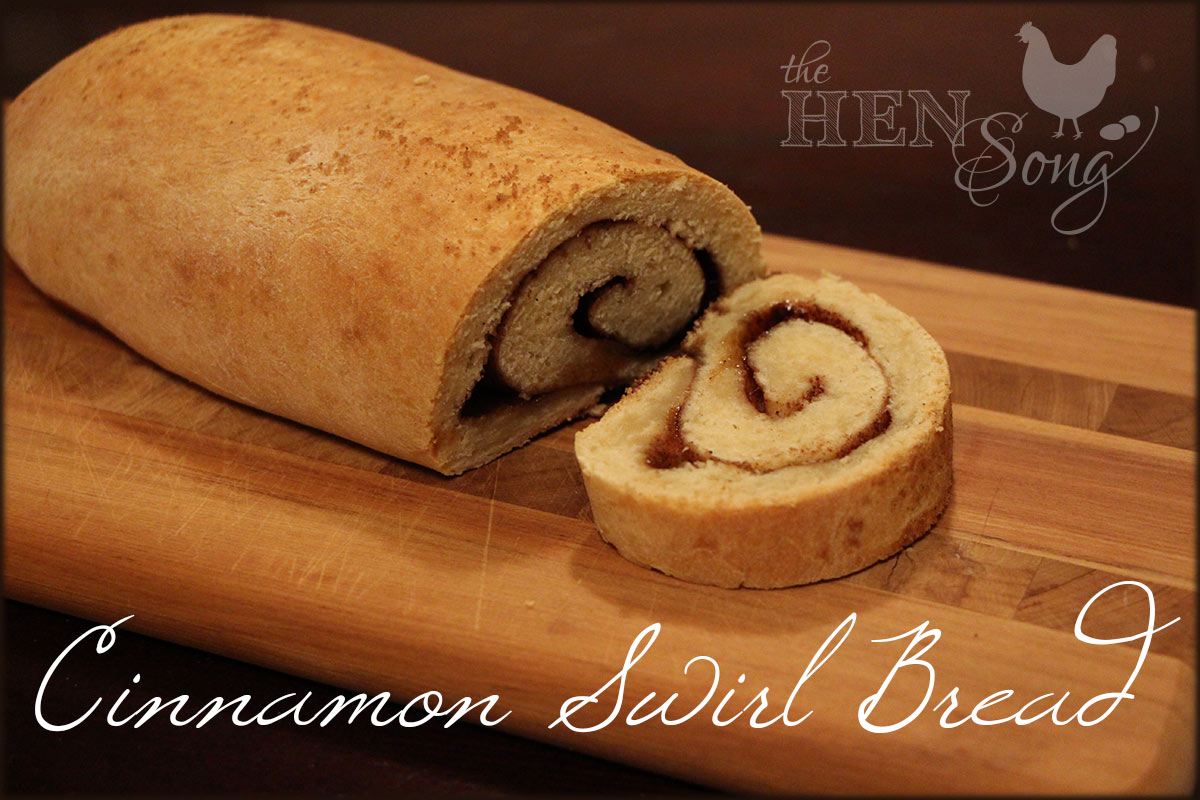 Stir together 1 cup of spelt flour and yeast.

Heat milk, water, and 1/8 cup brown sugar, 2 tablespoons butter and salt (though I forgot the salt and it didn’t seem to matter) over low heat until butter is melted.

Slowly add heated mixture to flour yeast mixture and mix well. Blend in the egg. Add the white flour (though you really can add whatever flour you’d like), a little at a time, until the dough chases the spoon around the bowl. Then, turn out dough on lightly floured surface and knead for at least five minutes, adding flour as needed. Form dough into ball and place in a greased bowl, cover with plastic wrap or tea towel, and let sit in a warm place for about 45 min to rise.

After dough rises, knead dough and roll out to about 1/2 inch thick rectangle. Brush with melted butter, then sprinkle the cinnamon sugar mixture on top. Beginning at the short end, roll the dough up very tightly to form a roll. Flatten ends a bit and roll them under the bottom. Place roll in greased loaf pan. (Try not to have too much cinnamon mixture exposed or it can ooze out the bottom while baking.)

What is the hen song?

Well, once you hear it, you'll know! When a hen has just laid an egg–or is getting ready to lay an egg–she will sing out loud and proud! Each hen is different, and not all gals sing. Some just lay their egg quietly and go on their merry way. Others want the whole world to know that they just did something totally incredible!

Growing up in New England we would often visit farms to pick apples, pumpkins and Christmas trees. Since moving to Alaska some 20 years ago, I have learned to fish and dipnet, smoke salmon and halibut, grow my own vegetables, make preserves from the berries I harvest, bake bread from organic ingredients, and raise happy, healthy chickens for beautiful, healthy eggs.
I am happier and healthier knowing where my food comes from. And the choices I make have a direct effect on the environment in which I live.
Life is good. And getting better all the time!